How Heavy is a Whale Shark?

To compare the whale shark’s weight against other species, as an example a killer whale is only a fraction of its size of around 13,000 pounds.

For another comparison a large great white shark can weigh up to 5,000 pounds, but is still relatively a small size to a whale shark.

How long is a whale shark?

Whale sharks can grow to an impressive length of around 40 feet or more. That is over 12 meters long.

How big is a whale sharks mouth?

Is a whale shark a whale or a shark?

The whale shark is the largest fish in the ocean, but let’s clear up a point of confusion right from the start. Marine biologists do not place whales and whale sharks in the same species category. Whales, such as humpbacks, blue whales and killer whales, are mammals. 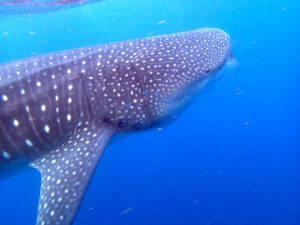 The whale shark is not a mammal — it’s a fish. What’s the difference?

Whales are mammals because:

They are warm-blooded
They breathe oxygen just as humans and land animals do.
They use lungs to breathe
They give birth to live young
Their tails move up-and-down, not side-to-side

A whale shark is a fish because:

They are cold-blooded
They don’t have lungs and use gills to extract oxygen from water
They lay eggs instead of giving live birth
Their tails move side-to-side, not up-and-down

How big are whale shark babies?

We already told you that an attribute that makes a fish a fish is the fact that they lay eggs and do not give birth to live young. However, in the case of the whale shark, the process is a kind of combination of the two.

Whale sharks produce eggs with a hard shell, but the mother whale shark then keeps these eggs insider her abdomen until they hatch. When they are ready to go, the mother “births” the hatchlings. The average baby whale shark is 20 inches in length.

Marine biologists do believe, however, that on some occasions a whale shark mother will deposit her eggs unhatched. This may be the case when a mother is low on energy or has not eaten for a long time. Hatching eggs internally is an energy-intensive process.

What do whale sharks eat?

Whale sharks are classified as omnivores because they eat both plant and animal products.

The vast bulk of their diet is plankton. Most people think of plankton as small water-borne particles of greenish vegetation, much like algae. The make-up of plankton is more complex and diverse, however. Plankton is actually a mixture of both plant-based organisms and tiny animals of wide variety. Whale sharks also routinely swallow things like fish eggs, tiny shrimp, tiny fish and even bacteria.

That being said, whale sharks end up eating a huge amount of algae along with plankton because of the way they feed. Marine biologist call them “filter feeders.” This means they simply open their huge, gaping jaws and vacuum up everything in their paths. If you want to get more technical about it, whale sharks employ a method called “cross-flow filtration.” What this means is that fluid moves along the surface of their filter membranes rather than taking it straight in to be absorbed and filtered.

You might be wondering how much a whale shark must eat every day to survive and thrive. It may surprise you that marine biologist’s estimate that whale sharks eat only about 45 pounds of food per day. Compare that to the blue whale which eats up to 8,000 pounds of krill per day. Yes, a blue whale is twice to six-times the size of the average whale shark, but the difference in food amount eaten per day is noteworthy.

Furthermore, whale sharks actually go for months on end without eating anything at all. This enormous ocean creature is known to fast for up to four-months. The reason is that the distribution of food in the ocean is patchy. Whale sharks travel constantly — they need to move continuously to breathe by sending oxygen-laden water moving through their gills. In this way they frequently traverse areas where there is no plankton.

Whale sharks have worked out an adaptation strategy to gorge themselves when food is plentiful and simply go without when food is scarce. How heavy is a whale shark while fasting? It is unknown if their weight varies during fasting times.

Where do whale sharks live?

Whale sharks are widely distributed throughout the world’s oceans, but they favor a zone that is between the latitudes 30°N and 35°S. They prefer warm and tropical waters.

You won’t find them in the icy waters of the North Sea or near the Arctic or Antarctica. They are commonly seen in both shallow-water and deep-water regions.

Do Whale Sharks Have The Same Spots?

Whale sharks are noted for their unique covering with white spots. It’s interesting to note that each whale shark has its own special pattern, so much so that specific individuals can be recognized based on their spot placement.

Researchers used special software that was initially designed for mapping stars to examine spots on photos of whale sharks. In one case, they were able to identify a whale shark photographed near Mexico as the same fish that was later seen off the coast of Brazil.

How Much Does A Full Grown Elephant Weigh?

How Tall Do Giraffes Grow?

This article contains affiliate product links and Amazon affiliate links. Which means I may earn a commission if you click and buy. As an Amazon Associate we earn from qualifying purchases.